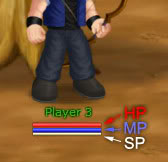 In HF, characters can be moved by pressing the respective up, down, left and right keys. The defend, jump and attack buttons are used to make the character perform an action. Attacking another character causes him or her to lose HP (health points), represented by a red bar below the character. A character is defeated if his/her HP drops to zero. HP slowly regenerates when below 25%.

Some of the basic moves (such as running, jumping, dashing and somersault) take up SP (stamina points), represented by a white bar below the character. MP and SP recharge automatically over time.

Hero Fighter has a riding system in which players can jump on to horses and monsters to increase their speed or strength with lessened manoeuvrability. While fighting on horseback, some actions differ from when the player is on the ground. Additionally, even when a fighter is knocked down, it is still possible to deal damage to the fighter.

Fighters are also able to use objects in the game, such as boulders and the trunks of trees and even jump on them as platforms.

Hero Fighter supports up to 3 human players playing in the same computer. First of all, you need to know what are your control keys. You can setup the Key Configuration by choosing "Key Setting" in the main menu. Or click on the "Keyboard" icon at the top right corner of the screen.

Control keys consist of Up(↑), Down(↓), Left(←), Right(→), to move your character, Attack(A), Jump(J), Guard(G), to perform the specific action, and Command(C) to give orders to your teammates and/or troops.