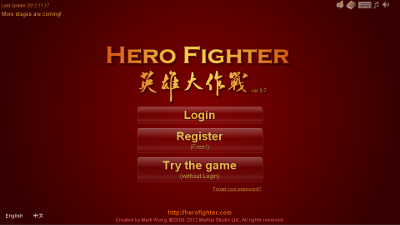 Note: The original installer of this game is not provided here due to the Hero Fighter Toolbar being considered a potentially unwanted program as of 2014, and hence getting the file blocked by most browsers. The original executable file has also been replaced with a different one created with Adobe Flash Player Projector, because of black screen bug on Windows XP and not opening bug on some reported cases in Windows 10. The original Room Server has also been replaced with a modified one that fixes many network bugs and provides new features.